© OeAD/Zotti
Stefan Zotti visited the OeAD Information Office in Baku, Azerbaijan during his business trip and signed the renewal of the contract for the branch office until 2019.

During his working visit to Azerbaijan Zotti met colleagues from the OeAD branch office at the Azerbaijani Language University in Baku. Together with the rector Kamal Abdulla he signed the renewal of the contract for the OeAD Information Office in Baku – until the end of 2019.

The programme also included a visit to the Azerbaijan Diplomatic Academy and the Azerbaijan State University of Oil and Industry as well as meetings with the EU representation, the Austrian embassy and colleagues from the DAAD (German Academic Exchange Service) office in Baku.

During his trip the OeAD’s director general also visited the Georgian capital Tbilisi and held talks with the Austrian ambassador, Arad Benkö, and the Georgian Minister of Education and Science, Mikheil Chkhenkeli. 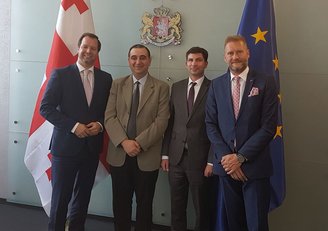 For the operation of our website we use operationally necessary cookies to provide you with an optimal website experience. Additional cookies are only used if you agree to them. We use these for statistical purposes or to display individual information. You can decide which categories you want to allow and you can also change your cookie settings at any time. For more information about the cookies we use please see our privacy policy. By clicking on "Select all and agree" you agree to the use of all cookies. To adjust your cookie settings select the desired checkboxes and click on "Confirm selection".